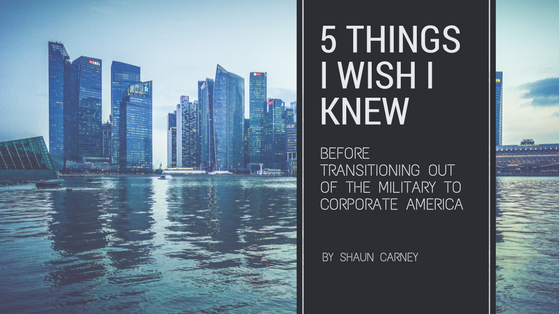 Taking the leap, like any dive into the unknown, can be scary. Transitioning from a culture unified by integrity and service before self adds to the uncertainty of an industry built quite differently. I transitioned from active duty Air Force to corporate America over a year ago, but the process actually started four years prior. Like many before me, I knew I was ready to make the transition because I ultimately felt it was best for my family. What I wasn’t as prepared for was high standards and perceptions set, the sacrifice, and let’s just say it- working for the government, I always knew there would be a steady paycheck on the 1st and 15th and losing that security was scary.  Now that I have gone through the transition, I wanted to share some things I learned along the way to help make that leap for those to follow a bit less steep.

1 – The corporate world values the military.  Several years after I graduated the Air Force Academy, I made a trip back to visit a friend who was coaching football at the AF Prep School on base.  While showing me the new Prep School weight room, we saw a famous Academy graduate, Greg Popovich, jogging around what we call, “The Par Course.”  For those that don’t know, Greg Popovich is the head coach for the NBA team the San Antonio Spurs.  When we first approached Coach Popovich “Pop”, he seemed bothered that we were interrupting his post jog cool down at his alma mater; however, my friend told Coach Pop that he was a Prep School Football Coach, and he immediately opened up. Answering all our questions, one response has stood with me until this day.  My friend asked, “what’s the best way to get hired by another team if all my coaching experience is with a military Academy?”  Coach Pop gave some great advice, but nothing was stronger than when he said, “you will have instant credibility amongst your peers, because the head coach knows he doesn’t need to worry about you sleeping with the cheerleaders.”  I have never heard it said so eloquently! I always knew there was an unspoken trust given to those who have served.

I experienced the same trust when I started my career in corporate America.  As a financial advisor for a large brokerage firm, a lot of self-starting is required.  I was out of the office, away from supervision and expected to grow the business.  I immediately saw I was given more leniency, and my supervisor had more trust in me doing my job compared to my peers.  I would love to say this was because of who I was as a person, but that trust came from the many people before me that have served and made the transition to the corporate world themselves. Those veterans set the standard, and it was my job not to let them or those behind me down by not living up to that same standard.

Corporate America has taken notice.  I used a recruiting service, Cameron Brooks, before I made the transition. I had opportunities to interview with many of the Fortune 500 companies around America that have seen veterans perform in corporate America and are willing to give veterans an opportunity to excel.  There are no guarantees, but there is no doubt in my mind that if you are willing to make the transition that someone is willing to help you succeed.

2 – Veterans are wanted, but it won’t be easy. The military is a structured institution – and for good reason. You know what’s expected of you, you work hard in your position, and you respect your superiors. If you put 20 years of active duty sticking to that, more than likely, you can retire. Just think about that for a second. I started serving when I was 22 years old, so that would make me eligible to retire at age 42. Usually (and I emphasize usually) that is not the case in corporate America.  I remember a group message I was in with about a dozen of my close buddies who had already made the leap into corporate America. When asked in the group text what everyone was up to that day, I responded and said I had a couple emails to send, long lunch break, workout and will probably make it home by 4:00. My friend, who recently transitioned from the military to a corporate recruiting service said, “enjoy it while you can, I will be at the office until 8, and my paycheck will be half of last months’.”  His statement only earned a chuckle from me at the time.  It wasn’t until I made the transition out of the military that I felt the pressure of hitting target numbers and feeling the pain of a variable paycheck that his statement really hit home with me.  It was no longer about showing up, taking some bad assignments, not complaining and doing your job.  Now, I had to perform, or I was going to have to dip into savings to pay next month’s bills.  It wasn’t the pressure of leaving home for 6 months on a TDY or moving my family to the middle of nowhere Mississippi. It was the first time I realized the pressure of corporate America and that a fixed retirement check was going to have to be earned with a different type of commitment.

3 – Everything comes with a price. My grandfather was a very successful business man. He retired as the VP of Public Relations for a natural gas company after starting with the firm as a meter reader.  One day when I was complaining about moving my family around in the military, he looked at me and said, “Shaun, everything comes with a price.  If you want to receive a pension starting at age 42, the price is moving your family around, deployments and not stepping out of line.  If you think you are going to get out of the military and everything is going to get easier for you and your family – you’re wrong.”

I had a teammate at the Academy that got out of the military because he spent too much time away from home.  He became an environmental engineer in the corporate world.  He spent the next 2 years learning the business and his work ethic and drive helped him promote quickly.  He became an expert and spent the next 2 years traveling around the country giving presentations.  He spent 300 days a year on the road during those years.  Ironically, he left the military to spend more time at home and ended up spending more time away from home.  After talking in depth with him, he said the same thing my grandfather told me several years earlier, everything comes with a price.  He knew he could continue to travel and climb the corporate ladder and potentially increase his earnings substantially, but there was a price.

4 – Buying a home. I moved 6 times in 8 years while I was in the military.  I bought homes at 3 of the locations and rented at the other 3.  When I was getting ready to transition out of the military, my wife and I were extremely excited to finally set roots down.  The problem was we didn’t know where those roots were going to be set.  We were open to jobs across the country.  We just wanted stability.  When I was in the military, getting a loan was easier than brushing my teeth.  I’d get my orders, find out my housing allowance for the area I was moving and pick out a house.  The loan was approved, and we were moving in 30-60 days later.

I was in for a rude awakening when we tried to buy our first home post-military.  There were no orders, no housing allowance, no guaranteed check on the 1st and the 15th.  The loan officer wanted proof of my hiring, new salary, proof the job wasn’t temporary and every financial record imaginable.  It delayed my purchasing of a home by 3 months!  This was my first dose of the post military financial burden.  I never thought getting a loan was hard.  I used to just snap my fingers, send an email and I was approved.  Now, I didn’t have proof that I was going to be with the company for very long or that my salary was going to be stable – those are all assumptions in the military.  Heck, the military even told me that about every 3-5 years I am almost guaranteed a pay raise.

So, my advice for buying a home post military is be prepared for it to be different and to take a little longer.  Get your spouse prepared for potential heartbreak – I know that is easier said than done because a lot of us made the transition because we were exhausted from all the heartbreaks.  You are going to need to have a contract from your new employer, proof of location, strong financial statements, and potentially additional letters from your employer.  Do not expect it to be as easy and straight forward as when you were in the military.

It was challenging for me to make the transition and not to trust everyone and everything.  It just went without saying in the military.  I never used a lock on a base gym, I never counted my change, I never had to question someone’s integrity.  I have received several comments from coworkers about my over trust of people.  I have had to adapt to following-up with people, verifying information and facts so that I don’t look like an idiot with my supervisor.  I have had to question co-worker’s actions to investigate whether or not they are truly trying to help me or advance their own careers.

I am not saying the culture is necessarily worse outside the military, it’s just different.  A lot of times it is necessary because it creates action and pressure to perform, and in the corporate world – performance is everything.  It’s okay to fear the unknown. Your Academy experience has given you the tools to distinguish yourself in corporate America – you just have to use them. Be prepared for a change in a fundamental custom that has been instilled in you for several years now.  Change is good – just be prepared for it.

To learn more about Shaun and how Bolt Financial Group can help you, visit our website www.boltfinancialgroup.com or call us at (614) 635-0102