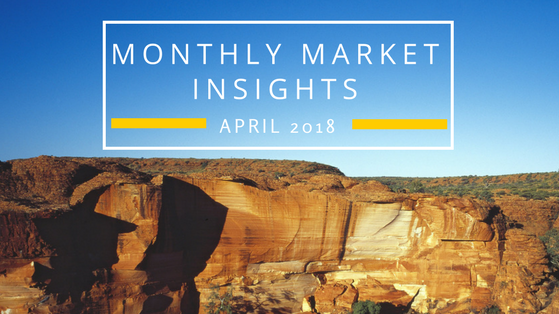 The month got off to a shaky start as investors reacted to news that President Trump would impose trade tariffs on steel and aluminum imports. Subsequent reports indicated that selected nations would be exempt from such tariffs, which helped the market recover some of its earlier losses.

Fears of a deteriorating relationship with China were soon realized as the White House announcement that it would be enacting tariffs on $60 billion in Chinese imports. Adding to the trade woes, a rout in the technology sector stemming from data privacy issues led to the worst weekly stock market performance in two years.

The March employment report improved market sentiment, however the positive outlook did not last long. Trade war concerns zeroed in on the U.S./China relationship, causing markets to weaken once again.

If that wasn’t enough news for the market to digest, stocks were further challenged by turnover in White House staff and a tweet by the president that he might not sign a spending bill that would keep the government operating. In the end the bill was signed, much to investors’ relief.

Amid all the trade talk, the Fed on March 21st announced a 0.25 percent increase in the federal funds rate. The rate hike was widely anticipated and had little impact on the markets.

In the final week of the month, the markets surged higher on hopes that negotiators might avert a trade war, only to see much of the gain lost the following day. Markets ended the week on a positive note, but it fell short of preventing another monthly decline in stock prices.

What Investors May Be Talking About in April

Currently, investors are witnessing global equity markets’ sensitivity to talk of trade tariffs, and the specter of a trade war.

From the market’s perspective, tariffs could stoke inflation, lower corporate profits, and upend the “synchronized global economic growth” storyline that has helped stock prices rise to all-time record levels. Tariffs introduce uncertainty, and the markets historically have struggled during periods of uncertainty.

After implementing steel and aluminum tariffs against a number of nations, President Trump announced tariffs on imports from China (these tariffs on Chinese products won’t be made effective right away: the Treasury has been given 60 days to craft a plan).

The basis for the recent announcement of China tariffs goes back to August 2017 when the federal government started an investigation of Chinese laws, policies, and practices related to American intellectual property rights and innovation. The tariffs are designed to change what the Trump Administration believes are unfair trade practices that have harmed U.S. businesses.

China has announced its own set of retaliatory measures, to take effect in the event that the U.S. imposes the trade levies.

The U.S. and China are the world’s two largest economies, with trade between the countries totaling nearly $650 billion in 2016.3 While the U.S. buys much more from China than China imports from the U.S., China is an important customer for American goods and services.

A trade war between the two countries could have global repercussions. Investors will be watching closely whether negotiations over the next several weeks can prevent an escalating trade battle.

Overseas markets did not escape the selling pressures brought on by the talk of trade tariffs, with the MSCI-EAFE Index dropping 2.43 percent.4

Major European markets were under pressure, with France, Germany, and Switzerland all closing lower. The United Kingdom slipped 2.3% in March, and is down 8% for the three months ending March 31, 2018.5

Economic growth in the fourth quarter was revised higher to 2.9 percent, up from an earlier estimate of 2.5 percent.7

For the third-consecutive month, consumers cut back on spending as retail sales fell 0.1 percent in February. Lower spending was most felt in auto sales, though sales declines were experienced in a wide range of consumer sectors, from health products to electronics.9

The cost of consumer goods increased 0.2 percent, momentarily easing concerns that inflation might be accelerating.14

Orders of durable goods jumped 3.1 percent, a rate well ahead of the consensus expectation of a 1.5 percent increase. It was the largest increase since June 2017.15

As expected, the Fed raised interest rates on March 21 by 0.25 percent, also indicating that it may raise rates another three times this year rather than two, as previously thought.

Even more surprising, the Fed raised its estimate for the pace of economic growth and indicated that the unemployment rate may decline further, and without a material impact of the inflation rate. In other words, the Fed predicts that higher economic growth may come without necessarily igniting inflationary pressures.16

To learn more about April's Financial Insight, or to continue to receive further monthly market insights, complete the information on 'Discover How We Can Help You' section on our home page.