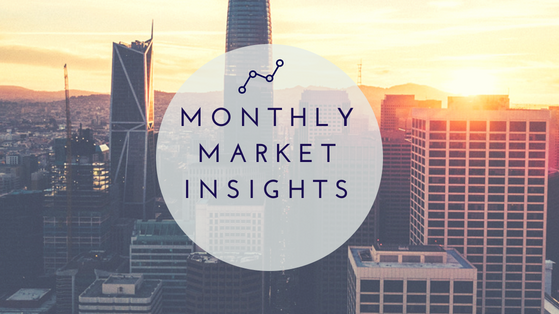 Investors’ hope of an imminent trade deal with China was shattered in May, driving stocks lower and increasing market volatility.

Stocks opened the month mixed. They slipped on May 1st, following comments by the Federal Reserve, which appeared to eliminate the possibility of a rate cut this year. But they recovered on news of a strong employment report, which pointed to continued economic strength.

A Sunday tweet by President Trump threatened China with additional trade tariffs, sent stocks tumbling, and unnerved investors eager for a trade deal by the end of the month.

China responded with counter-tariffs, causing stocks to extend their decline. Following China’s response, many investors realized that the trade talks had moved from an imminent signing to a stalemate. However, stocks turned slightly positive following the release of healthy economic data and hopes that the Fed would act if economic activity slowed.

As the month wore on, trade tensions continued to feed investors’ anxieties, driving the market into a broad retreat. Energy and commodities were hit hard by worries of a global economic slowdown, and a series of weaker-than-expected economic reports did little to encourage investors.

Stocks stumbled on the last day of trading, following President Trump’s threatened tariffs on Mexico – in response to the flow of South American migrants into the U.S.

What Investors May Be Talking About in July

As the U.S. and China trade dispute continues, investors are attempting to anticipate what’s next for the two nations, regarding their $737 billion trade agreement.3 It’s possible that Mexico and Canada may soon start to share headlines with China.

The United States-Mexico-Canada Agreement (USMCA), signed in November 2018, must be ratified by each country’s legislative branch. Any hiccups in the ratification process could have broad implications for U.S. trade with Mexico and Canada, which hit $1.38 trillion in 2018.4

President Trump agreed in May to end U.S. tariffs on aluminum and steel imports from Mexico and Canada, smoothing the way for passage of the USMCA by each respective countries’ legislatures. However, hope is fading that the U.S. can pass its portion before the August Congressional recess.

Upcoming elections could also slow the pace of ratification, with Canada’s federal elections scheduled for October 2019 and the U.S. presidential election slated for November 2020.

President Trump has threatened to withdraw from the North America Free Trade Agreement (NAFTA) if Congress doesn’t approve the USMCA. The lack of a long-term agreement could mean disrupted supply chains, which could influence consumer prices as well as the financial markets.

The MSCI-EAFE Index sagged under the weight of higher trade tensions, falling 5.42 percent.5

The second estimate on first-quarter GDP was revised down by 0.1 percent, from 3.2 percent to 3.1 percent.8

Housing starts jumped 5.7 percent in April. Home building remains soft this year, with housing starts down 7.2 percent year-to-date versus the same period last year. 12 Sales of existing homes declined 0.4 percent month-over-month, and came in 4.4 percent lower year-over-year, despite the tailwinds of a strong labor market and falling mortgage rates.13 New home sales declined 6.9 percent, the largest monthly drop since December. However, purchases of new homes were 7 percent higher compared with those in April 2018.14

Prices of consumer goods rose 0.3 percent in April. Core consumer prices, which excludes the more volatile food and energy sectors, rose a modest 0.1 percent. Through the last 12 months, inflation reached 2.0 percent, which marks the first time for the year-over-year CPI since November.15

Orders for long-lasting goods declined 2.1 percent, on the news that Boeing was suspending delivery of its 737 Max, leading to a plunge in civilian aircraft orders. Weaknesses in motor vehicles and parts and business investment further dragged April's numbers lower.16

Minutes from the two-day Federal Open Market Committee, which ended on May 1, revealed few surprises. The minutes reflected the Fed’s general comfort with its wait-and-see approach to interest rates as well as its belief that softness in inflation was transitory.

It should be noted that several committee members did raise concerns over the prospect that below-target inflation might persist and take hold. There was no discussion of a rate cut to address this worry.17