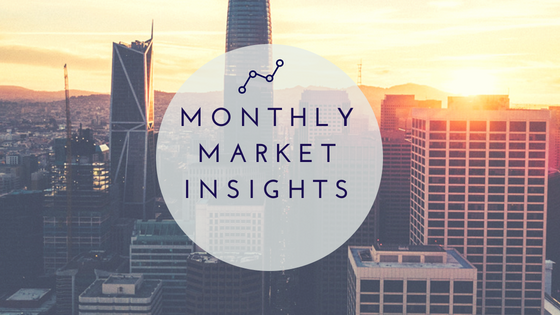 Stock prices choked in August as concerns about an economic slowdown and global trade tensions proved more powerful than upbeat news about the American consumer.

Stocks opened the month lower on concerns that the Federal Reserve might not pursue interest rate cuts at a pace that’s in line with investor expectations.

In case you need a refresher: the yuan is not freely traded; the Chinese government monitors its movements against the U.S. dollar. A weaker yuan makes Chinese exports less expensive to buy with foreign currencies.

Last month, China’s currency fell below 7 yuan to the U.S. dollar for the first time since 2008.2 The stock market stumbled, but found some footing as China took steps to support the yuan, easing the trade issues that were raised by the change.

Later in August, China imposed new tariffs, prompting the White House to encourage U.S. businesses to look for alternatives to China. After markets closed on August 23, additional U.S. tariffs were announced for some Chinese imports, leaving investors the weekend to consider what this meant for stock prices.

As the month wrapped up, stocks moved higher during the final week of trading, bringing an end to a choppy market month.

In the coming weeks, tensions may heat up between the U.S. and its European trading partners.

The World Trade Organization has determined that the European Union illegally subsidized Airbus SE and harmed U.S. aircraft sales. The WTO is expected to decide on penalties against the European Union, possibly impacting Airbus SE operations spread throughout Europe, including France, Germany, and Spain.4

The penalties may be announced in the next few weeks. The WTO is expected to give the U.S. the “green light” to set up new trade rules with European importers. If the U.S. takes that step, European trading partners may respond by seeking an updated trade agreement.

In light of ongoing U.S.-China trade talks, tariff issues may continue to weigh on investors for the remainder of the year, feeding further market bumps.

U.S. economic growth was revised lower, ticking down to 2.0 percent from its initial estimate of 2.1 percent. Higher corporate profits and an upward revision in consumer spending were outweighed by weakness in the housing sector, exports, and inventory investment.8

New jobs grew steadily in July, with nonfarm payrolls rising by 164,000. The unemployment rate remained unchanged at 3.7 percent, while wages picked up a bit, increasing by 3.2 percent from 12 months ago. 9

The consumer evidenced real strength as retail sales jumped 0.7 percent from the prior month. Excluding autos, retail sales were higher by an impressive 1.0 percent.10

Housing starts fell 4.0 percent from the prior month, the third consecutive month of decline.12 Existing home sales rose 2.5 percent and were higher by 0.6 percent year-over-year, the first such increase in 16 months.13 New home sales plunged 12.8 percent, the indicator’s biggest monthly decline since July 2013. However, new home sales were up 4.3 percent compared to July 2018.14

Consumer prices rose by 0.3 percent in July, a sign that inflation may be gathering a bit of steam. The year-over-year increase was a tamer 1.8 percent.15

Durable goods orders rose 2.1 percent, an upside surprise from consensus expectations and the second straight month of month-over-month increases. The gain was attributed to demand for aircraft and parts; excluding those, durable goods orders declined 0.4 percent.16

The minutes show that Fed officials considered the 0.25 percent federal funds rate and adjustment to its monetary policy rather than the onset sustained easing cycle, which would lead to a series of interest rate cuts.

While the Fed explained that trade uncertainty is an economic headwind, it stopped short of making any commitment to continue reducing rates. Fed officials said that they were open to further interest rate cuts should economic circumstances warrant them.17